The Shops get built, Part 2

I also built a Grocery with a Pharmacy upstairs.   I love having advertisements on the buildings!   The interiors have a loooonnnngg way to go but I got a unit built for the Pharmacy late last year though I still haven't filled it up.   The exterior is a white brick (paper). 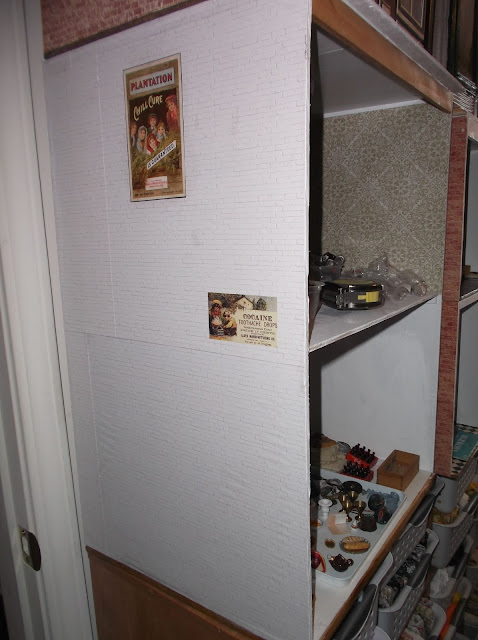 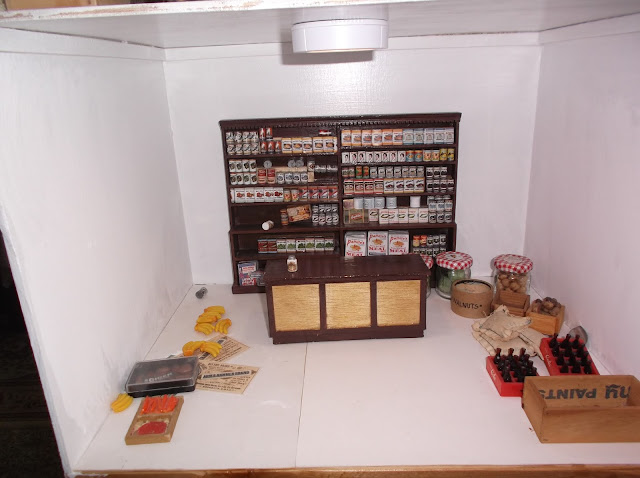 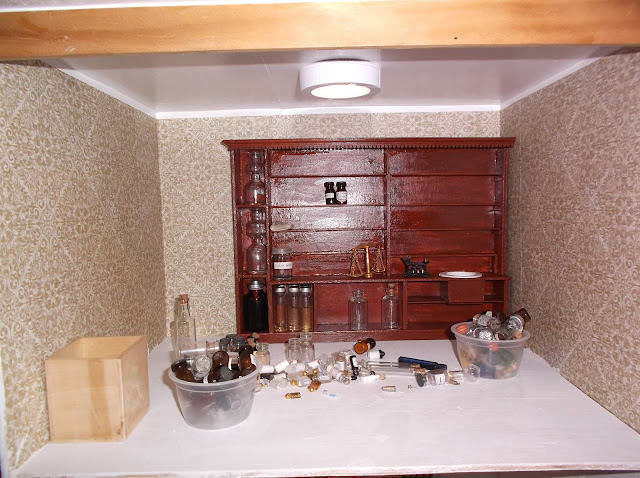 Here is the shop building underneath the Fish and Deli shops.  The space to the left of the Deli shop will have a stair up to the second floor which is an art studio.
The building beneath will have a barber and a hardware shop downstairs and a pawn shop and switchboard & telegraph office upstairs.    I haven't yet glued the floors together as work still progresses - EXTREMELY slowly. 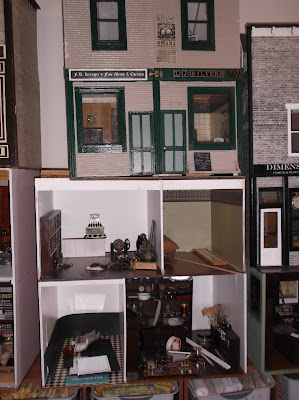 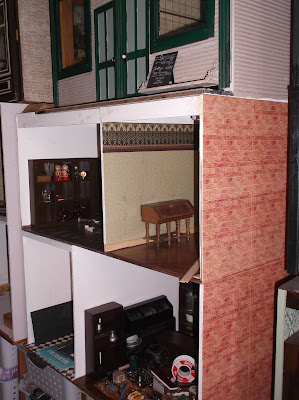 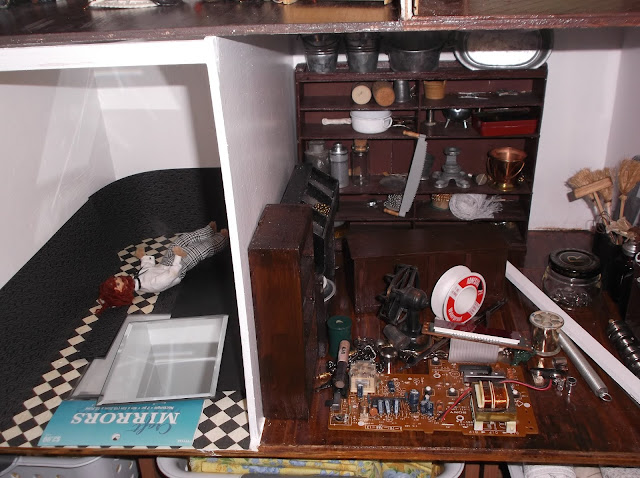 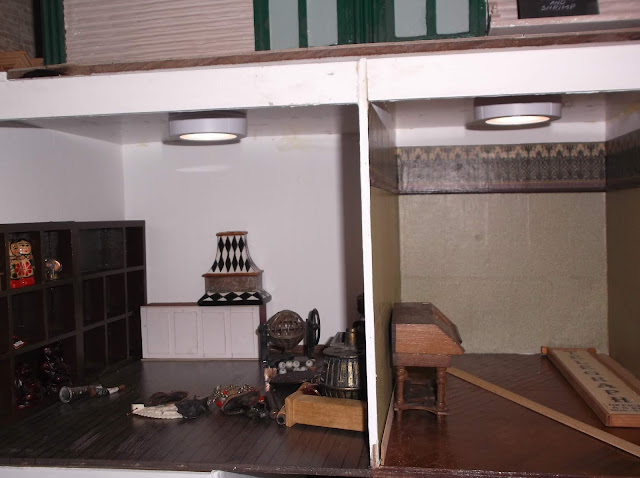 And lastly, the Tall Building (I call it).  I added some to the right hand side which doubled it's width and allowed me to have - 1st floor a Photographer, a Hall with a door to The Daily Irony which is the newspaper of the town of Facetious) and a shoe-shine stand and magazine, newspaper & cigar stand as well as a fake door which will indicate an elevator to the other floors.   The second floor will be a Ladies Emporium and the third floor has a lawyer's office an a doctor's office.   The fourth floor is a sort of civic hall for any activity I want to show happening there.   I am thinking of adding a winter garden/conservatory on top but I may not as it too high up.  Whatever will happen to that lovely staircase if so...I don't know.    And sitting inside this building for no earthly reason, is my farmer's stand and on the first floor the door(s) that will be in the front when front's there be. 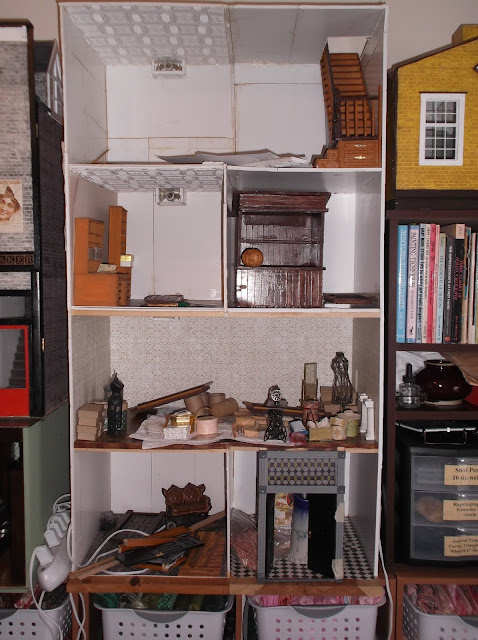 The Shop shells get built, part 1


I've got a fair amount of arthritis now and so I decided when the weather warmed up (finally) in 2018, to at last build the shops I've wanted since the 90's.   Since this involved using the table saw I spent a LOT of time planning things down to the last 1/8" so as not to have to do any more cutting than absolutely necessary.

I have to confess that when I began building my houses back in the 90's I was unbelievably careless with the power tools.  I worked barefoot, without eye protection (other than my glasses) and hand protection.   But I never had a mishap though I burnt out a jig saw I recall.   Anyhow, this summer I began to build the shops that sit under the older shops (you'll see what I mean by that later)   I got the shells built and fronts will come, hopefully in 2019.

The first was my Housewares store.  It is 24" wide and 14 1/2" deep and about 12" tall.    The Big unit on the back was is an old printer's tray I found 10 years or more ago in an antique mall and this is what I planned for it.   The shelf units are all glued in and filling them is going to be, I truly hope, years of enjoyment.

The weird painting in the 3rd picture is the bottom of the old Shop building I call the Gateman building.  It was something I painted way back in the 90's.  I have since made a nice wooden ceiling which means you can no longer see it.  The Gateman building (with the grey brick and red door) sits on top of this one.   The beautiful green exterior doesn't really show to advantage in these photos. 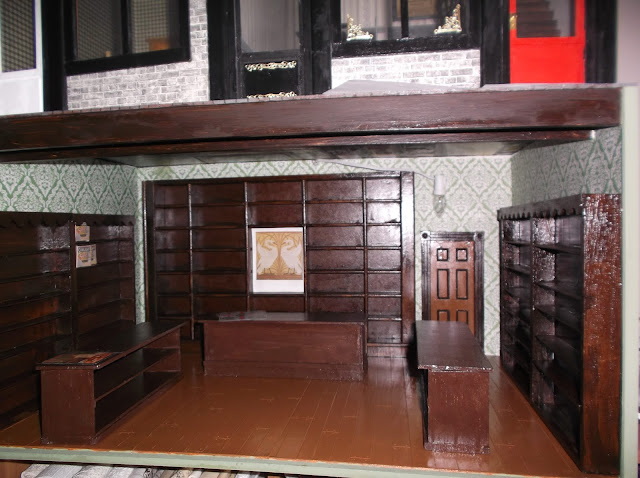 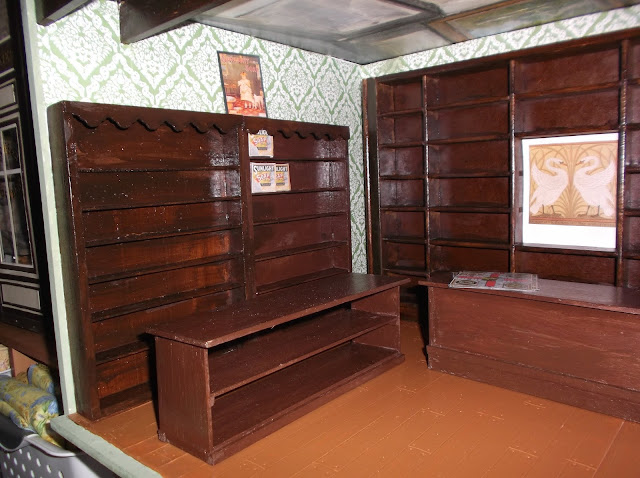 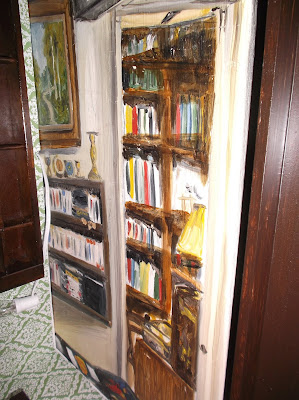 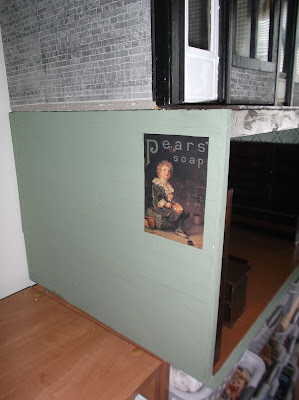 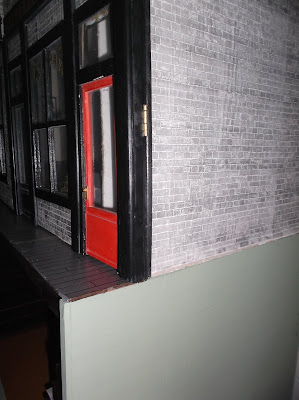 The Mess of the Move

I'm going to show some pictures from the move where I had to deal with the furniture that came out of the house that got torn up.  It took me weeks to get the stuff assigned into boxes  and I used my pictures to help me do that but it is a good reminder of that difficult period.   I labelled the boxes all just "Dollhouse Furnishings" so when 2018 came long - it was intimidating to approach them, I had no idea what was where and there were, along with my many other plastic boxes of things to build mini's with, about a dozen murkily labeled DH furnishings, eee-gads!

Warning: these are very UNTIDY!   Maybe it's good for me to see these again now, reminds me of where I was...      In one of them you can see how "pink" Merebrick had become. 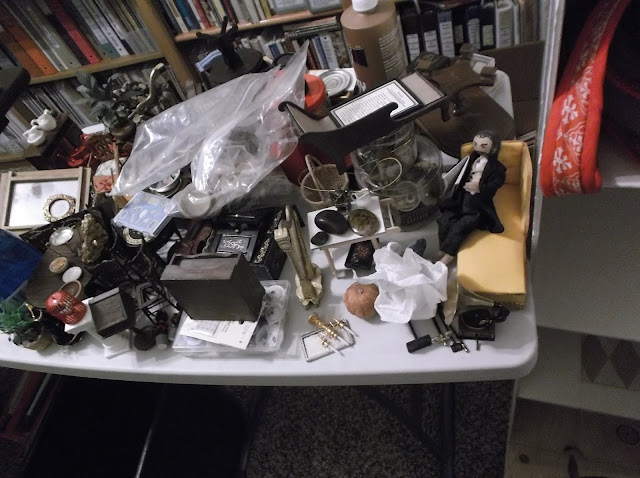 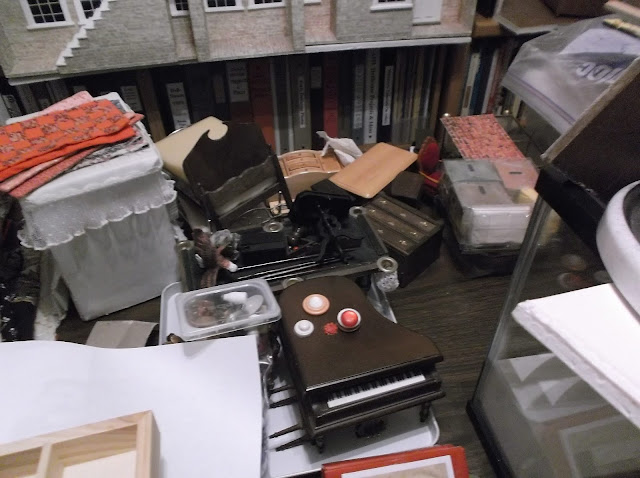 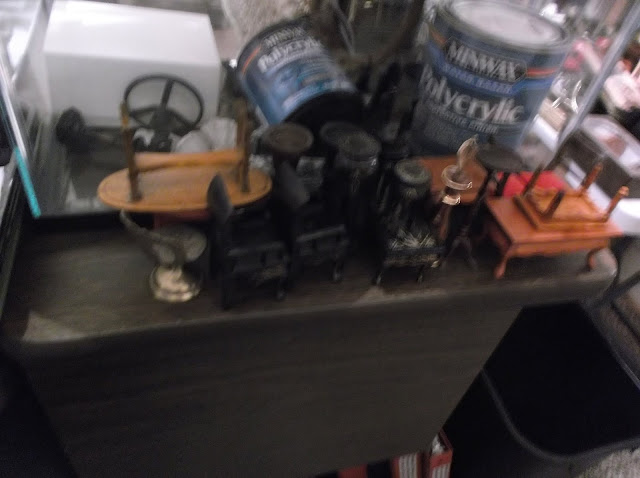 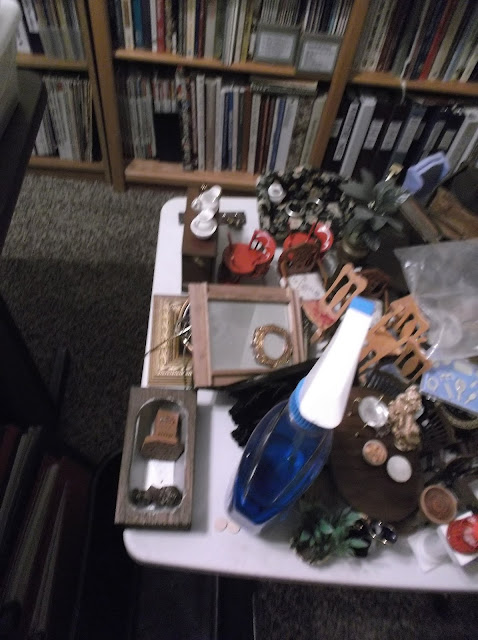 FIRST there was a very big move (and a downsizing one) and a certain "house" never finished but much worked upon, got literally torn apart by me (because it wouldn't fit in the new place) and the components that could be saved, were.

Secondly, there was a somewhat earlier than expected retirement a year an a half later.  And thanks to that I have been going through all my miniature stuff collected the last 20 years or so.    This has been a slower process - since I am older - but progress is happening slowly but steadily.

The first thing that happened in 2017 was what I call the rebricking of Merebrick.  The old brick paper had gone...PINK!   I could NOT have a pink brick house and the Bricks themselves would never stand for such an indignity especially with Mr. Brick being an architect and eventual mayor of Facetious.
I had always planned to have an enlargement (upwards) to Merebrick and an extension and both are in progress, pictures to come...

To the left of Merebrick sits the Tavern/Inn which I had an extension cut out but could not begin to assemble it (and further complete the rest of it) until now.

To the right of Merebrick is that nice little bandstand which also has brick paper on it's base that has gone pink - it too will have to be "re-bricked".

The second picture shows the one-room schoolhouse which in 2017 got it's wooden base put on at last and a clasp.   The base got finished although in this picture it is raw. 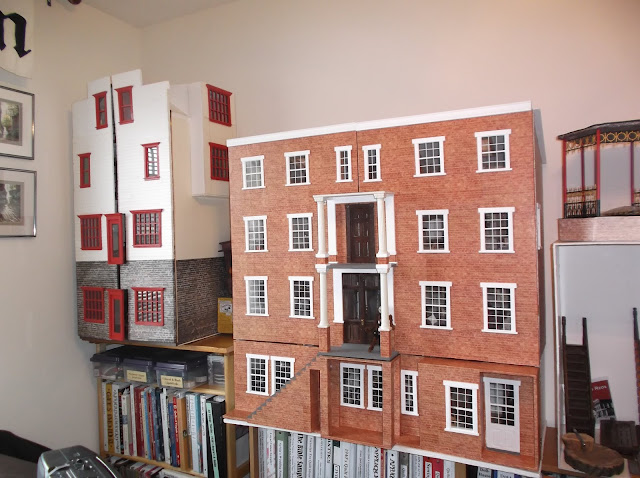 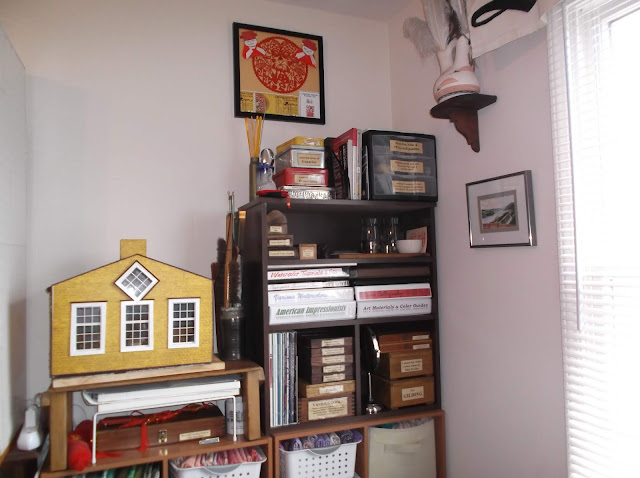