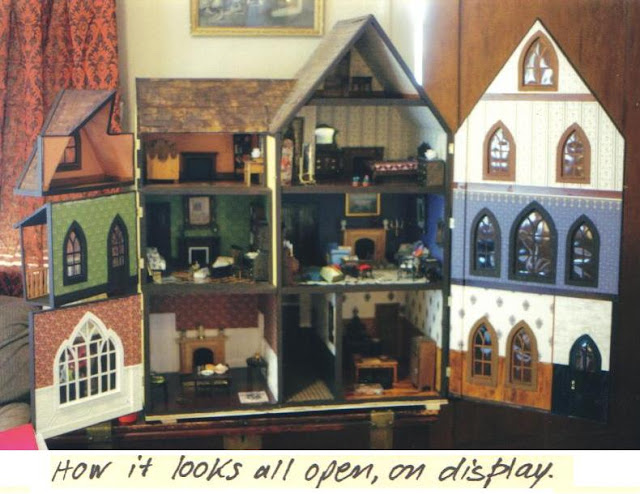 This is the manse of the Presbyterian minister T. Asa Brick, his wife Liza B. Brick, and the last of three sons, Petrous. Despite her name, his wife is the housekeeper and Slothaven is a wondrously well kept manse. Asa, as he called, fought in the Civil War on the Union side while his brother, for reasons of his own, fought on the Confederate side. They have no differences now and all the Bricks get along famously. Asa and Liza’s oldest son is Solled who is married to Dimasa Trifle and are off producing numerous little Bricks. Asa and Liza’s second son dies in the Spanish /American War. Their third son is Petrous (detail below).
There has been some recent redecoration. The front hallway has new pictures hung in it along the line of Asa’s. favorite period, the Middle Ages. There are indications of this interest of his throughout the house. The house itself is in the Gothic revival style.

The dining room is papered a busy but beautiful paper. This is where the Women’s Auxiliary meet, but when currently seen there is a wedding reception about to happen. 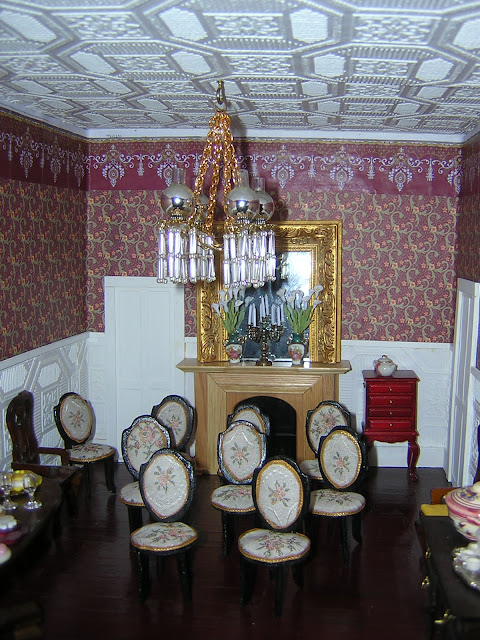 As the title said...  There will always be a wedding about to happen in this room.  I'm proud of how well I did up these extremely cheap Greenleaf chairs.  It was in 2005 and under tense times when hubby was facing a layoff which happened and resulted in a major move/relocation.  I made chairs like crazy, 9 of these and 14  from House of Miniature kits.    This is how you can make hay out of hard times!
That obnoxious & ostentatious looking chandelier I was making when recouperating from have all 4 wisdom teeth out and suffering from another tooth that needed a root canal and had to wait till I finished recouping, ugh! 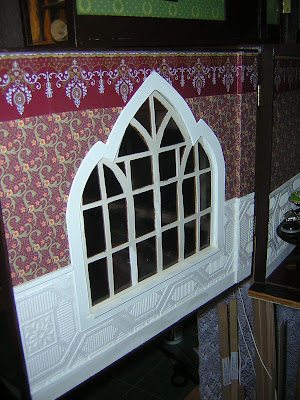 And it still needs a bit of cornice!

The blue parlor is a gracious and large room. The organ is also in here for this is where family services are held when for some reason the church cannot be opened or gotten to. Not a few weddings have also been held here. 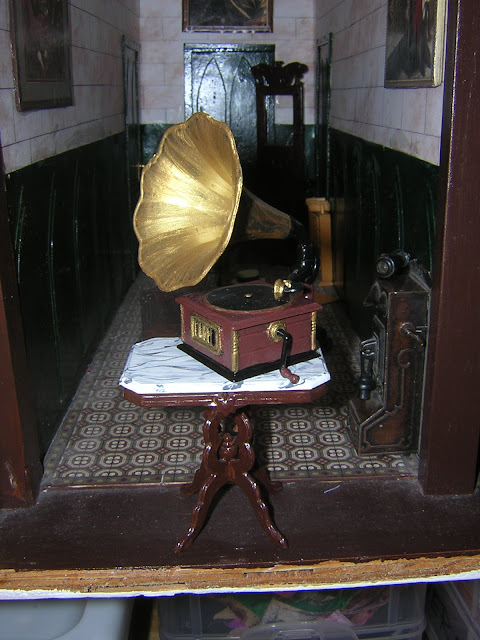 The Rev.’s study is above the dining room and is his sanctum sanctorum. It is decorated in as medieval a style as he can manage. He spends many an hour in there daydreaming (more than he ought) when he should be working on his sermons. 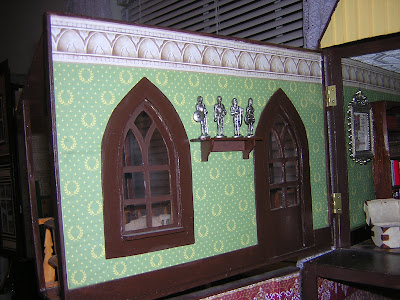 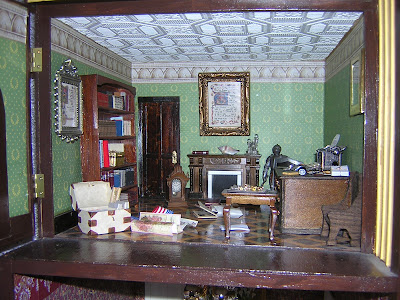 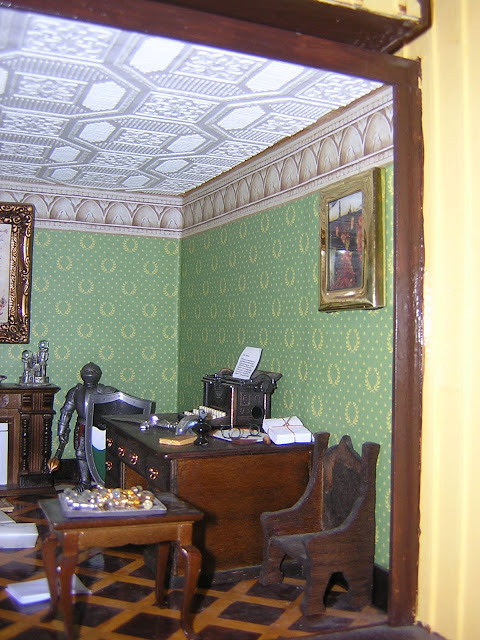 I have been waiting since 2000 to find just the right frieze for the study in Slothaven.  I found it and put it in and here it is....       I need just the smallest cornice and then to get the rest of the room fully "done up"!

The Rev. Brick, as can be seen, has a penchant for the medieval.
Above the study is the bedroom of their last son at home, Petrous. He is a great reader which his parents approve of and his current interest and passion is for the novels of Burroughs, these can be seen littering his bedroom. He resembles his father in that he spends perhaps more time daydreaming than he “ought to”.
Next to Petrous’ bedroom is his parent’s bedroom which is a comfortable bower.
Above their bedroom is an attic room belonging to the maid.
Rooms behind the main section of the house that can’t be seen are the back hall and stairs, the cook’s room, a pantry, a bathroom and various closets.

Near the manse is (will be someday) the graveyard for Facetious, the Presbyterian graveyard at any rate, and there can be seen the headstones of some of the dear departed souls of the town including their own son, Sturdivant. The Bricks covered both sides during the war with the Rev. brother (Major Justa) fighting on the Confederate side and Asa fighting for the Union. War seems to haunt the family with a second son who died in the Spanish/American War.