I have long wanted this book and I have just today ordered it: 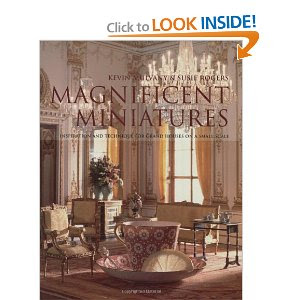 The teacup on the cover alone is very interesting, makes me want to put one of mine in a room and take a picture of it.


Right now nothing is going on in Facetious.  I am out on a quilting-jag and simply pass by poor Ariel which has a skeleton lying in the dining room, a sorry state of affairs but fortunately, the family does not yet live there since it isn't finished.  They are safely esconsed in the Imperial, Facetious's premier hotel which, alas, will never be built because I don't have the space for it.

At least they are spared the indignities and covert goings on (aka "the coffin") at the site of their future home.

But when this book arrives I suspect things WILL begin to happen again.

I just took a gander at the insides of this book thanks to Amazon.com's feature that allows it.  WOW!  One's jaw drops and the eyes glaze over.  I think there will be loads and lashings of inspiration in this volume.
Posted by CLMT at 10:01 AM 1 comment:

I finally managed to get a picture of the inside of Gateman's, the funeral shop.   It is of course no where near finished but is presentable I guess. 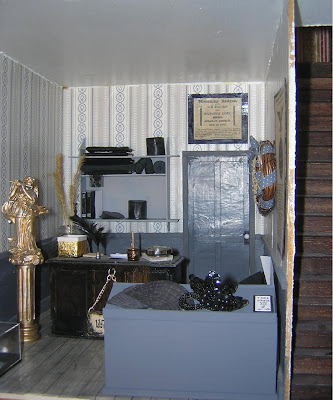 The walls are just too BARE!
Posted by CLMT at 6:22 AM No comments:

The other part of the Ohio River Towns tour 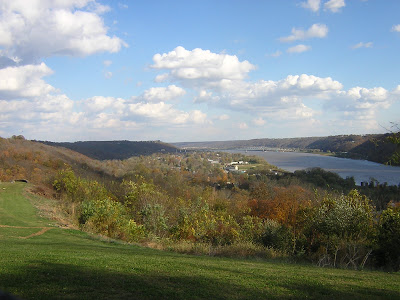 I'll start with another lovely photo of the
Ohio River valley. 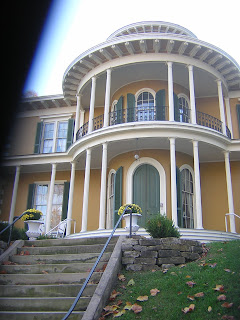 Hillforest didn't allow photos to be taken inside so I'll just show this outside one which I thought interesting because of the rounded front.  It would be quite the accomplishment to replicate in miniature.   The first floor curved section housed the entryway to the house and the second floor was a morning room which the tour guide said was where the ladies of the house spent their mornings having breakfast, writing letters etc.  It was the most charming room with the curved wall of windows overlooking Aurora and the Ohio River and to be able to sit there in the morning having your breakfast which has been made and brought up to you, ahh, the life!
I'd love to have such a room in Ariel but I don't see how I can do curved walls much less windows.  But, I could do sections or an octagonal room perhaps - we will see.... 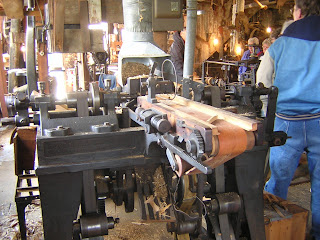 We also saw the Schroeder Saddletree Factory and at first we saw what I thought was perhaps the offices of the place.   The Schroeders were hard-working German immigrants who made the wooden part of a saddle and other items.  During the Depression they made over 2 million clothespins on this machine.  That cute fellow in the blue jeans on the right is my husband.

Towards the end of the tour I asked about where the family lived imagining great wealth and a mansion somewhere.  To my surprise the guide said they always lived right there next to the factory, they raised 4 children (3 boys and 1 girl) who lived all their lives in this small place.  Here is how the front looked: 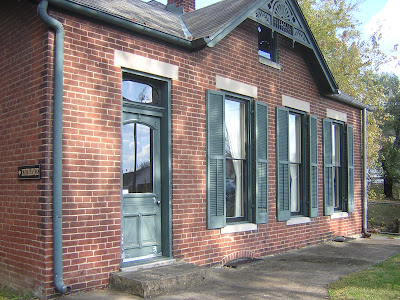 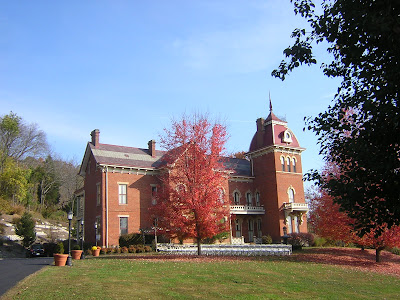 The fourth home we saw was the Schenk Mansion which is also now a Bed & Breakfast.
It is huge with 35 rooms!   The owners let us walk about and take as many photos as we liked and I wish I had taken more.
There had been a wedding the day before, hence the white chairs.

We even got to climb all the way up to the tower room.  I discovered something about stairs that I needed to know.  I had bought a set of stairs from the local hobby store and felt that they were too steep, too narrow for the dignity of my Victorian era home.  I planned to use them for the servants stairs to the basement and even then I wasn't too comfortable with them.  I bought some good wide Houseworks ones for the main floors.
But in the Schenk Mansion and in Hillforest and the Lanier House I encountered the steepest stairs I've ever used and often my size 8 foot hung over the treads by inches!!!    So, as I pointed out to my hubby and am now doing here, I am more than comfortably assured that those cheap narrow, steep stairs are just the thing for the lower level and will also be used for the upper rooms of Ariel. 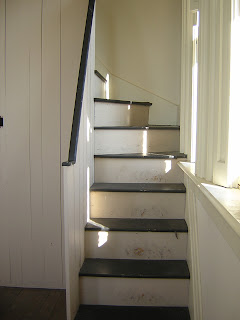 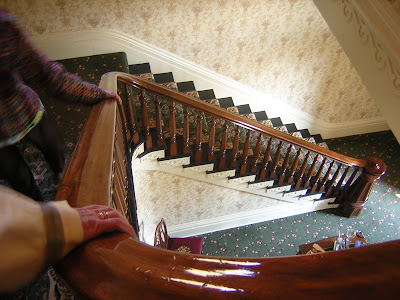 Meanwhile, the Main staircase of the Schenk Mansion required a photo 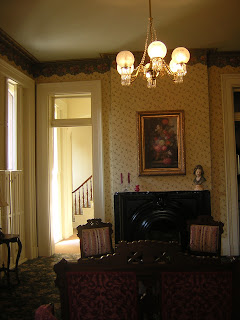 Both the Schenk & Lanier homes had these wonderful interior shutters which I have not seen done in a dollhouse before.  Of course both houses have 3 brick thick walls too.


Several of the bathrooms had COPPER TUBS that were very long and the owners said that oddly enough the men liked them best because they were large enough for them to lie comfortably in.   I tried but could not get a good shot of the bathrooms (which were surprisingly narrow yet perfectly functional). 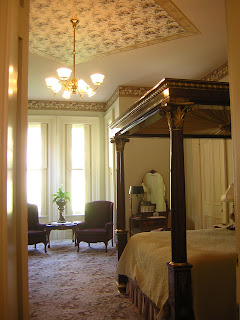 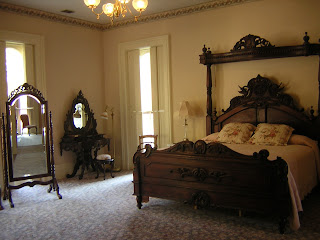 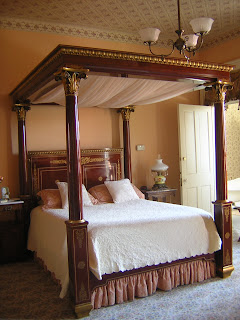 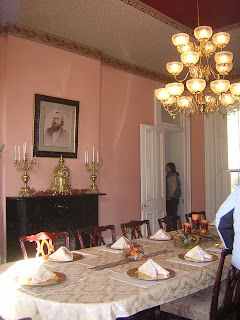 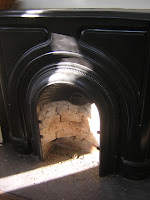 Above are a couple of the bedrooms, the dining room and a photo of a fireplace surround up in the tower which I found interesting.

And to end with another fine view this one from the Lanier House looking out over their front garden to the Ohio River - how nice it would be to have such a view everyday! 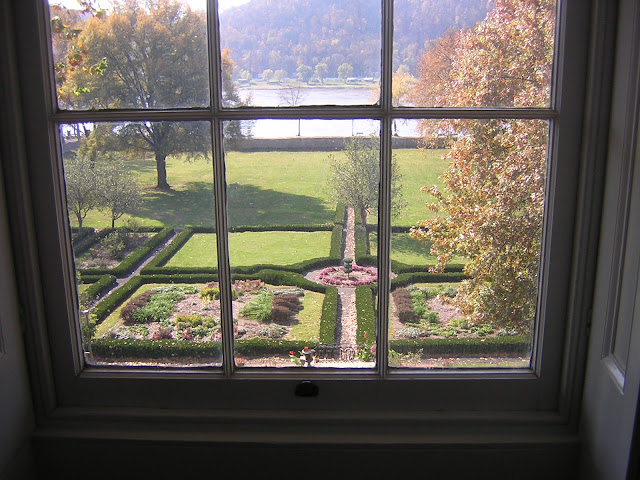