The tavern was originally owned by H.E. Doobie Skandless who affected to great respectability in his dress and deportment.  He had a secret affair with the town’s milliner, the “widow” Mrs. May B. Wantinne.  Later on they actually married.
After the tornado ripped through Facetious in 1880 the old “Toughnut Tavern” needed such extensive repair that H.E. decided to sell it to some ambitious and energetic new immigrant to Facetious.  This turned out to be Istvan D.E. Toth, fresh from Hungary.  He decided to upgrade in a number of ways.   The first thing he did was to rename the place and the second was to acquire a copy of a Bouguereau (1873) which has become a highlight and centerpiece of his establishment.
Above the thirst parlor are the real money makers, a gaming room for the inveterate gamblers of Facetious and the inn rooms to let as well as two “barmaids bedrooms” which are actually a quietly run bordello.  This is a “great black mark” on Facetious as they publicly claim and  many is the sermon preached about it or referring to it, yet it does an excellent and thriving business.
There are occurrences that coincide with the arrival of Istvan which are not as good as the roaring success he makes of the Red Dragon.   A vampire arrived on the same ship and has taken up residence in Facetious.  An elaborate coffin is most definitely housed in Ariel and a few plain boxes of dirt reside in the cellar of the Red Dragon.  There is a new thread of uneasiness abroad in the town.

The Red Dragon Tavern is also known as the Thirst Parlor.  Thirst Parlor was a name actually used for a saloon/bar of the 1800's. I think it's a wonderfully euphemistic term.

I really got some work done this past holiday weekend!   I got the front trim all done and painted.  I got baseboarding in 2 of the rooms and 8 of the 12 windows in and one of the 2 doors in - glued in that is. 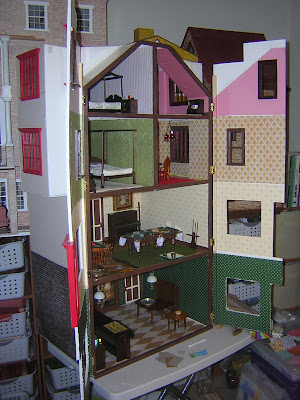 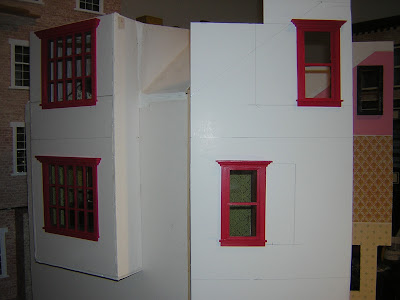 I can hardly wait to work on the siding I plan to have on the outside! 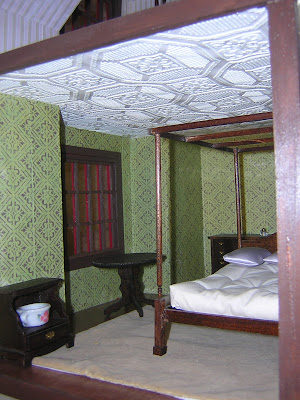 One of the rooms with it's window in place.
I have a lot of "undressed" beds.

Yes, that is a chamber pot sitting in that bed-stand. 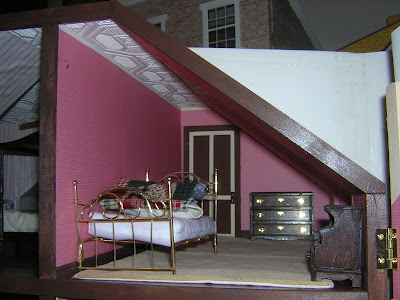 This is one of the rooms that got base-boarding.

Cornices also must be put in.

Since the local supplier (Hobby Lobby) has no more baseboarding I'm going to have order a bunch more. 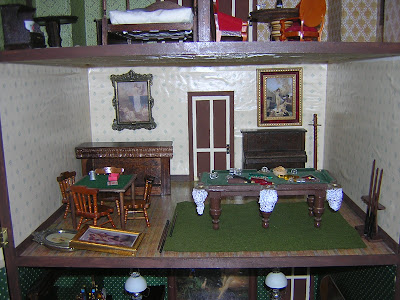 I also got the "game room" base-boarded.
I had to dust and clean the floors too.

Now I will spend this week working on the last four windows.  I have to cut out inner muntins, paint them, paint the outsides - I wish someone else could do the work part.
Red Dragon Tavern progress, finally! 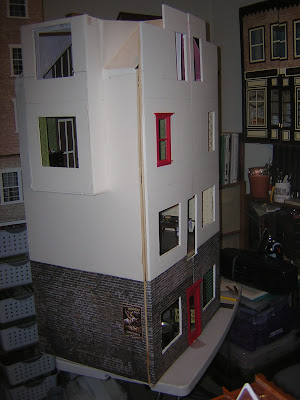 It has been waaay too long since anything happened at the Red Dragon and now it is moving forward!
It finally has the doors put on, "fronted" so to speak!

I have put a rough brick paper one level around the base and above that will be plain clapboard probably painted brown.
The windows and doors will all be RED as well as any fascia and some porches that will be added to the first two stories.

Back to the right you can glimpse of bit of the Ness Bakery. 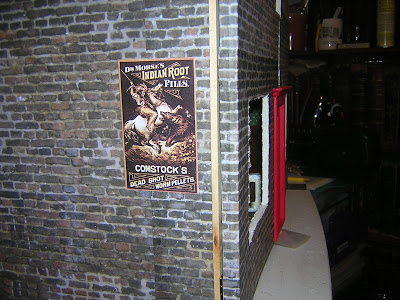 There will be some advertise- ments on the sides of the Red Dragon and this is the first. 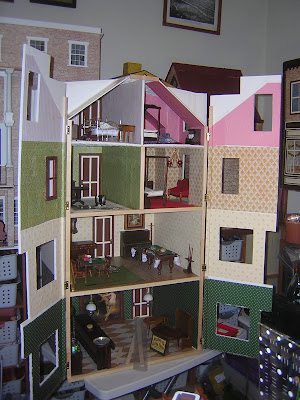 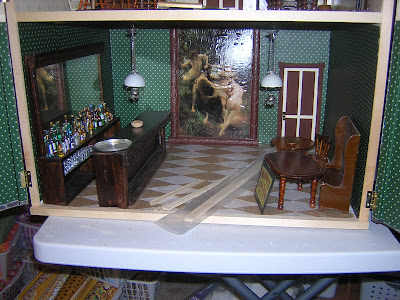 Here is how it looks with the doors open.
Much left to do but I am SO GLAD to finally have these doors on!!!!

Doors really cut down on the dust.  I could run my finger through the dust that has gathered on the floors of the Red Dragon.

I rearranged a bit and this may just end up being the new set up, who knows?  The famous Bouguereau painting is certainly featured this way! 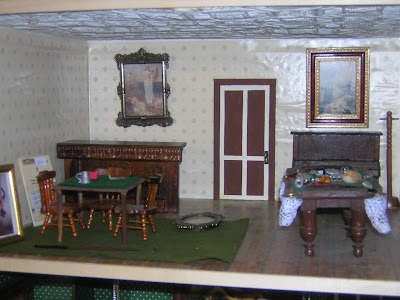 I got two pictures hung up but they didn't photograph to well, I'll try it again later when I get more done on this room.

You can really see the dust though under that pool table! 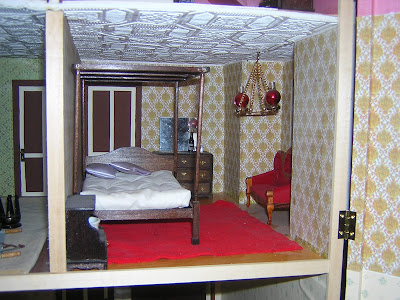 I have decided that each of the four rooms will have a sofa or chaise in it, preferably in the bay.
I'm going to need to buy a couple more and/or make more. 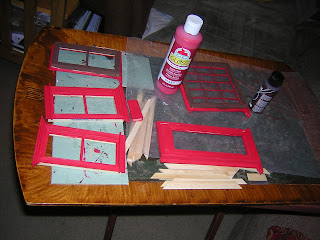 Here are the doors and windows being painted, some of them.  There are 2 doors and 12 windows which need interior trim and window sills.  I am particular about the window sills and have to add them myself.

I can hardly wait to glue them in but it will take a while to get them completely ready.

Here is a picture of the main bar: 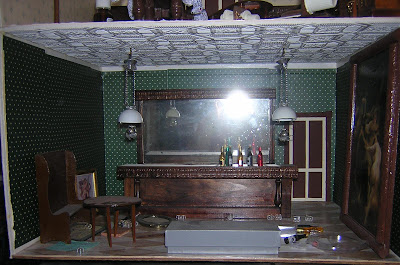 Here is the pool table I made which sits in the room over the bar: 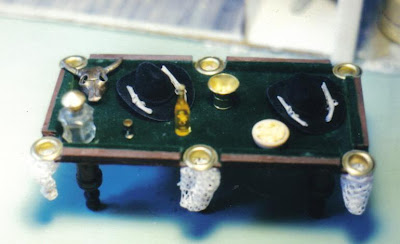